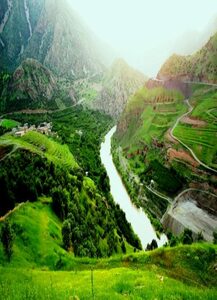 The township of Baneh is in the extreme western part of this province and is the neighborhood of Iraq. This township is bounded on north and west by west Azarbayjan in the east by Saqez and in the south by Iraq. Its center being the city of Baneh located 728 km. from Tehran. Baneh is covered with forests and is full of various trees. In the pre-Islamic period, a Zoroastrian tribe named "Qeh Qoo" governed this area, but after the Arab invasion, 'Ekhtiar Diniha' took over the rule. Till the mid 13th century the actual name of the city of Baneh was Behrojeh.

But now the cemetery in the north east of the city is called "Kohneh Baneh" A change in the city's location is due to a massacre resulting from cholera, plaque, fire and tribal combats. The city of Baneh is located in the altitudes and its route is on a gradient.

The township of Bijar is located in the north east of the province and it is restricted from the north to the provinces of Zanjan and west Azarbayjan; from the east to the provinces of Zanjan and Hamadan; from the south to the township of Qorveh and from the west to the township of Sanandaj. It's center is Bijar which is at a distance of 518 km. from Tehran. Bijar is one of the fertile areas of Kurdestan. Its climate in winter is cold and dry and is moderate in summer. In the Kurdish language the willow tree is called 'Bi' and the area of such trees is called 'Bijar.' Thus because of abundance of willow trees, it means the region of willows.

The same is one of the new townships of this province as before it was part of Sanandaj township. This township is located to the north of Sanandaj and is a mountainous region. It is bounded in the north by west Azarbayjan in the east by Bijar and in the west by Saqez. The city of Divandareh is located at a distance of 95 km. north of Sanandaj. Divandareh has developed from a village to a city in the last decade.

The township of Marivan is located in the west of Iran and in the neighborhood of Iraq. It is bounded on north by Saqez, in the south by Kamyaran and Kermanshah, and in the west by Iraq. Marivan is a cold region and is a century old. Farhad Mirza Qajar who governed just before the constitutional movement constructed a castle in Marivan. This border city was in the neighborhood of the Ottoman government.

Naseredin Shah ordered a castle to be built there in 1282 AH. In 1286 AH. , Haj Farhad Mo'tamed-o-Doleh further fortified the structure and named it Shah Abad. After Haj Mohammad Ali Khan Zafar-ol-Molk in the early Pahlavi era built a castle in Moosk Village that is now used as a garrison and it is not far from the city. The Zarivar Lake is to the west of the city of Marivan and has given a special beauty to this city, in addition to being a recreational area.

The township of Qorveh is located to the east of the province. It is restricted from east to the Hamadan province from the north to Bijar, from south to Hamadan and Kermanshah and from west to Sanandaj. It's center is the city of Qorveh which is located in a large plain 93 km. east of Sanandaj and northwest of Hamadan and has expanded in the direction of the Sanandaj road towards Hamadan. In the past the seat of rule of this city was the Qaslan Village. Here the governor of the times was responsible for the construction of some buildings, a castle, mosque, bath, garden and large groves.

Today, due to its distinctive geological characteristics, and mineral water springs, visitors and tourists are attracted to this city.

This township is located in the center of the Kurdestan province. It is limited to Divandareh from the north and to Kamyaran from the south, to the east are Bijar and Qorveh, to the west are the townships of Marivan and Saqez. Sanandaj is the provincial capital of Kurdestan and lies at a distance of 500 km. from Tehran. This city has a beautiful natural environment and pleasant climate specially in autumn and spring.

Soleiman Khan Ardalan the governor of Kurdestan constructed the Sahneh Dej (castle) during the Shah Safi period (1038-1052 AH.). In the past, there was the Seer city instead of present Sanandaj. Sanandaj was under the control of the Ardalan household for duration of four centuries. The said are descendant of the Sassanids. In the war between Iran and Ottomans in Safavid period, this family sometimes sided Iran and sometimes the Ottomans. In 1146 AH., Karim Khan Zand destroyed Sanandaj.

After a period of chaos, Khosrow Khan Ardalan took over the power. From 1214 to 1240 AH. Emam Allah Khan, son of Khosrow Khan governed in Sanandaj and to some extent he worked for the sake of improvement of Sanandaj. In 1284 AH. due to the dissatisfaction of the inhabitants, Haj Mirza Mo'tamed-o-Doleh the uncle of Naseredin Shah governed in Kurdestan till the year 1291 AH. Now a days Sanandaj is one of the beautiful townships of Iran and Kurdestan province

This city during the primary union of the Medes was their capital and was named "Izirta". On the attack of Sargan II, the ruler of the Assyrian, the Medes were defended and their fortifications destroyed. Thereafter, the Sekaha tried to rebuild this city and they chose Saqez, then named "Eskit" as their capital. The present name of Saqez is derived from the Sekeh (Seka-Eskit-Sakez) tribe. The city of Saqez was formerly in the southwestern plain of the present city and today it is reputedly known as old Saqez. Saqez city is located in the skirts of the attitudes and a river runs through it. It is one of the most beautiful areas in Kurdestan province.

The same is located 10 km. to the north of Sanandaj in mountain valleys of the "Sateleh and Tirgara" region. The length of the dam lake is 11 km. and it extends for about 934 hectares. Considering its height and volume of water, it is a suitable place for water sports. More over this lake is a suitable breeding area for a variety of fish. The verdant area with its surrounding forests is an attractive sight of the city, providing facilities for boating and water sports.

The Zarivar Lake is the most important and unique attraction in the west. This lake is situated at an altitude of 1,285 m. from sea level, and its width and length being 2 and 4.5 km. respectively. It has sweet water and the activity of springs at the bottom of the lake supplies it's water. The location of the city of Marivan and the Zarivar Lake bounded in different directions by dense and partly dense forests creates a very beautiful view. On a small hill in the eastern part there is a tourist guesthouse.